The art school began in Tanforan, a racetrack just outside of San Francisco, where over 7,000 people of Japanese descent were confined until Topaz was built. Many of the internees were living in horse stalls, turned into makeshift barracks with just a hurried whitewash on the walls and linoleum over the manure-covered floors.

The school was started by Chiura Obata, who as a child in Japan, began studying sumi-e painting, a traditional Japanese brush technique using various shades of black ink. Years later after immigrating to the U.S. he became an art instructor at University of California, Berkeley. 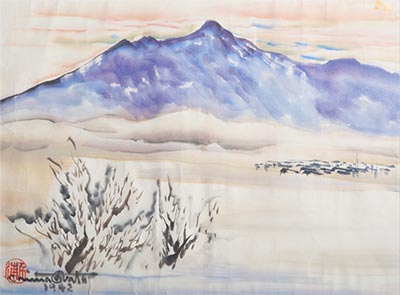 When World War II broke out, Obata could have avoided going to Topaz by relocating to St. Louis where his son was studying architecture, but instead he chose to remain with his Japanese friends who were swept away to one of the assembly centers at Tanforan. He felt his love for art could help others in their time of need.

At Tanforan, Obata started the art school because of his desire to continue painting, of course, but also to give people distressed by internment the opportunity to immerse themselves in the beauty of art and its creative healing power.

The school burgeoned to over 600 students ranging in ages from 6-70. Students could attend five levels of instruction from elementary to adult education classes. Sixteen teachers taught 95 classes per week on 23 subjects, including figure drawing, still life, architectural drawing, anatomy, and commercial art.

Since the internees had little access to cameras, in situ drawings provided a visual diary of daily life in Tanforan. Once the internees moved to Topaz in September 1942, the subject matter tended to broaden to portraits and landscapes.

The school thrived based on the personal philosophy of the artists and the encouraging philosophy of the school. Artists produced a wealth of work that was displayed at Topaz and is still the heart of Japanese American internment art.

In early 1943 all internees over 17 had to answer a loyalty questionnaire that pitted people against each other. The questions were confusing and difficult to answer. Obata answered that he was loyal to the US and on April 4 was attacked by an unknown assailant inside the camp. After spending 19 days in the Topaz Hospital, he left for St. Louis. George Matsusaburo Hibi took over the leadership of the school. Hibi expressed his philosophy by saying, “Training in art maintains high ideals among our people, for its object is to prevent their minds from remaining on the plains, to encourage human spirits to dwell high above the mountains.”

Artists and teachers continued to produce art to document their circumstances and conditions of internment and to elevate their souls beyond their stark surroundings. The school remained a popular part of camp life until Topaz closed on Oct. 31, 1945.

For more information about the Topaz Art School read Topaz Moon by Kimi Kodani Hill, Citizen 13660 by Miné Okubo, The Art of Gaman by Delphine Hirasuna, and Peaceful Painter by Hisako Hibi.